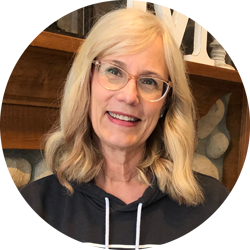 Sally had to learn the hard way that the career she chose out of high school wasn’t a good fit for her. After earning a degree in Art Education, the school budgets in her area were cut and art was the first thing to go. Sally was then led to a career still in the education sector but in sales and marketing. She became an admissions counselor for the college she graduated from and was able to help other high school students make a more concerted effort to find their best fit. She then became a marketing manager representing another college where degrees were tailored made for working adults. Her past experience with pursuing a major that did not suit her well allowed her to help others make a better choice.

A few years later, Sally was able to extend her skills into a partnership as she and her new husband began their financial planning business, produced a radio show and published a book. In her mid-50’s she decided after being in this career for over two decades it was time for something new. She spent a year pursuing a Professional Life Coach Certification, Career Code Certification and the Meyers Briggs Certification. Through the help of a wonderful business coach, “The Do Good Company” was launched. Sally has a gift for helping young people find their best fit in terms of a college major or career. In other words, she coaches them to find out what they excel in and use that to go into the world and do good! Her eagerness to help people of all ages get unstuck whether personally or professionally and move forward in life feeling confident about their choices is apparent from your first conversation with her. She is also very passionate about helping people free themselves from lies they believe so they can walk unencumbered into the abundant life waiting for them.

Sally has been married for over 30 years to a man that makes her laugh every day. Their three adult children are all working in careers that they love. Her other interests include enjoying nature (not roughing it), walks by a lake or ocean, kayaking, adventures to new places, popcorn, serving at her church and speaking on topics she is passionate about. She’s also a dog mom to a precious Yorkipoo named Ollie who may or may not be her replacement child.

Can life coaching help you?

The Good Stuff – “The Do Good Company, LLC” Give Back Program from Town Square Television on Vimeo.

We use cookies to ensure that we give you the best experience on our website. If you continue to use this site we will assume that you are happy with it.OkRead more